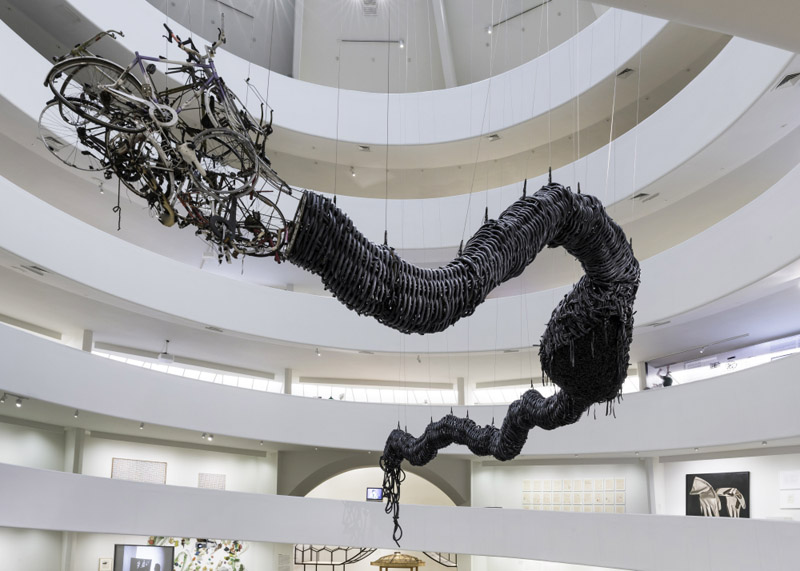 The exhibition - previously presented at the Solomon R. Guggenheim Museum in New York and the Guggenheim Museum Bilbao - shows an extensive survey of an historical period of Chinese contemporary art. It looks at student protests in Tiananmen Square in 1989 movement that anticipated the sweeping social transformation that brought China to the center of the global conversation. “Art and China after 1989” puts together a dynamic group of two generations of artists  - 60 key artists and artist groups living in China and abroad during the onset of globalization - who were active during a transformative period within the history of Chinese art and China. It presents over 100 works of painting, installations, video, photography, film, sculpture, performance, ink, and participatory social projects. At the entrance Chen Zhen’s dramatic Precipitous Parturition (2000), an 85-foot long writhing dragon sculpture created from found materials including toy cars, bicycle inner tubes and bicycle parts suspended from the ceiling. The installation offers a sly commentary on China’s problematic transition from an analog nation of bicycles into a strongly industrialized nation whose cars emerge from the belly of the dragon. The catalogue is published by the Guggenheim Museum and features essays from curators Philip Tinari, Hou Hanru and Alexandra Munroe, and annotated descriptions of the works on view with interpretive analysis by the curators and scholars Lu Mingjun, Katherine Grube, Xiaorui Zhu-Nowell, Stephanie H. Tung. It also includes an exhibition history of the period under consideration prepared by Jane DeBevoise  and Anthony Yung of the Asia Art Archive, Hong Kong.