During the next two months Michelangelo Pistoletto and his wife Maria, together with Galleria Continua will travel around Brasile, Cile, Argentina, Colombia, Ecuador, Perù and Cuba  to establish new connections with this beautiful continent. In his recent history Michelangelo Pistoletto has already established a deep relationship with Cuba, the last stop of the tour, where several editions of the Rebirth Forum have been organized and where Galleria Continua has exhibited his world renowned work.
Two exhibitions opening in Santiago and Lima, numerous talks and a lot of visits to museum and institutions for future collaborations will enrich this tour. This is in fact the first seed for the birth of other exhibitions that will be developed in the near future. One of the highlights in Santiago de Chile will be the emblematic performance Walking Sculpture also rolled two years ago in Havana as a symbol of freedom of movement and the active participation of all citizens in the life of the community.

The two artworks Third paradise and Love difference can be identified as the driving forces of this journey. As Pistoletto asserts in his illuminating text Hominitheism and Demopraxy: "With the expression Third Paradise we are indicating a possible course for the human race. Aware of the symbolic function of art, I decided to propose a symbol that could be used to represent this course. (...) If the First Paradise was the time of unconsciousness and the Second Paradise was the age of knowledge, the Third Paradise ushers us into the age of responsibility. (...) The course of world politics cannot be left purely to the logic of economic speculation.
Politics and the economy need to be inspired by a new way of thinking. The formative space for this thinking is the creative laboratory of socially engaged art. Love Difference is a movement of ideas arising out of this laboratory. Traditional political systems have revealed their inability to face and deal with the major problems inherent in the current cultural transformation, which concerns global society and the physical condition of the planet.”


In this page you will be able to follow Michelangelo Pistoletto and Galleria Continua in this beautiful adventure! 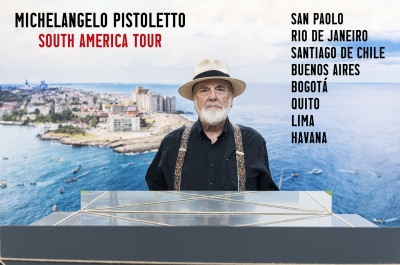