SHILPA GUPTA 'UNTITLED' 2009
A gate repeatedly bangs against the wall to which it’s attached, causing increasing damage. The outline of an irregularly shaped body is stuck between the bars. This body might be a concrete territory, or it could be a symbol of the human yearning for freedom that transcends all the boundaries surrounding it in the name of religion, gender or nation.

SHILPA GUPTA 'For, In Your Tongue I Cannot Fit' 2017-2018
Shilpa Gupta's new multi-channel sound installation gives voice to 100 poets who have been jailed through time for their writing or their beliefs.
Visitors will encounter 100 microphones suspended over 100 metal rods, each piercing a verse of poetry. Over the course of an hour, each microphone in turn recites a fragment of the poets' words, spoken first by a single voice then echoed by a chorus which shifts across the space. The poets' words emerge from microphones, fitted with speakers - a device Gupta has adopted in earlier works to remind us that the microphone is not simply something to speak into, but a means to broadcast at large scale. Here the microphone literally and symbolically gives a voice to those whom regimes from around the world have sought to silence. The idea of creating an archive of 100 emblematic instances is an approach the artist has adopted in previous works. "Someone else: a library of 100 books published anonymously or under pseudonyms" (2011), for example, brings together 100 books published by an author under another name, each one etched in metal with the reason the author desired to remain anonymous.
"For, in your tongue, I cannot fit" has similarly depended on an intensive period of careful research to identify 100 poets, and the resulting soundscape includes poetry composed in regions from around the world, in languages such as English, Arabic, Azeri, Spanish, Russian, Hindi, Urdu, Chinese and Turkish. The title of the work is inspired by a poem by the 14th century poet known as Nesimi, born in what is now modern-day Azerbaijian and executed for the religious beliefs expressed in his poetry which ran counter to dominant contemporary doctrines. This is one of a number of historic poems included in the work (with the earliest dating to the 8th century). The vast majority of the poems, however, stem from the 20th century up to the present day, reflecting the artist's particular engagement with the rise of the nation state, and the related social and political struggles for self determination and access to democracy and human rights.
Each individual poem, poet and their experience reveals a fragment of the wider stories and experiences of a particular nation or region. Together, they reflect the very different histories and relationships between the individual and the state in countries around the world. "For, in your tongue I cannot fit" incorporates a strong spatial dimension, unfolding a soundscape which cannot be experienced from a single standpoint, but which requires the visitor to move through the space, to actively listen. At points during the sound installation, the individual voice of a poet is repeated by a chorus - in a symbolic collective expression of what the individual has at other times been forbidden to express. The viewer, too, is implicitly invited to participate in this bearing witness, to hear the voices that have been silenced. The haunting work highlights the fragility and vulnerability of our right to freedom of expression today - and the bravery of those who struggle to resist.
Shilpa Gupta's sound installation is a joint commission by YARAT Contemporary Art Space, Baku and Edinburgh Art Festival.

SUN YUAN & PENG YU 'Can’t Help Myself' 2016
- Can’t help -
To consider an increasingly mechanized and automated global reality through the development of technologies and networks. Sun Yuan & Peng Yu’s new work, 'Can’t Help Myself' (2016), engages AI robotics and a visual sensor control system. In the exhibition space, we find a large robotic arm with a shovel atop a base. The machine rotates and shovels back an unidentifiable viscous deep red liquid that spreads out from underneath and around the base. Over time, the repetitive shoveling leaves marks and residue that resemble bloodstains, evoking the idea of surveillance and warfare surrounding border control and land disputes. Akin to real life, the borders that emerge and disappear. Beyond the blood and lives sacrificed in border conflicts and wars, these security mechanisms affect the everyday, from surveillance cameras in urban areas to smartphones that allow us to document and share moments of our lives while monitoring and controlling our behavior. These multiple layers of surveillance point to the relationship between humans and machines; as we create machines and design programs to control them, we inadvertently become subjects of their monitoring.
(From the Guggenheim Museum Publication: Tales of Our Time, 123-124)

SUN YUAN & PENG YU 'Dear' 2015
‘Dear’ articulates the notion of space and, at the same time, tests the limitations of freedom — a concept that ultimately has its own limitations. In simulating a confined but kinetic and willful form that undergoes schizophrenic agitation, the installation alters the perception of 'free' space and, in turn, limits the visitor’s physical and emotional experience around the objects.
Clara Tang 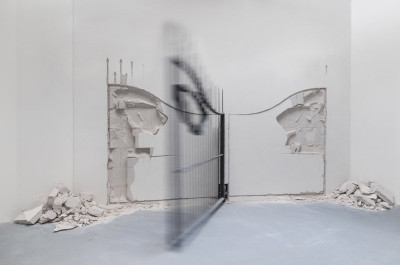 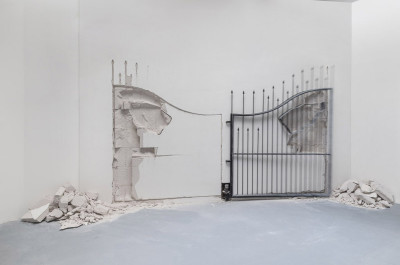 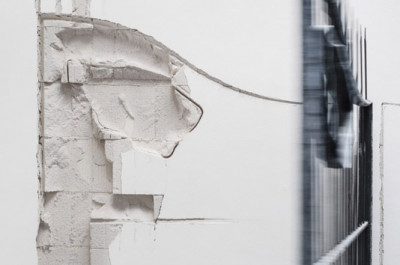 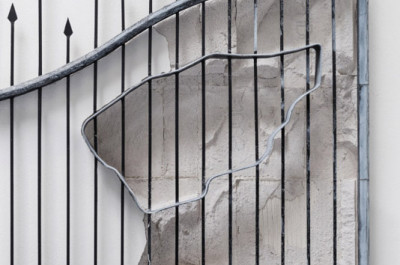 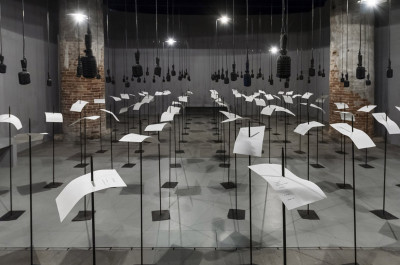 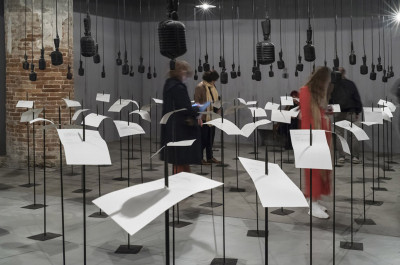 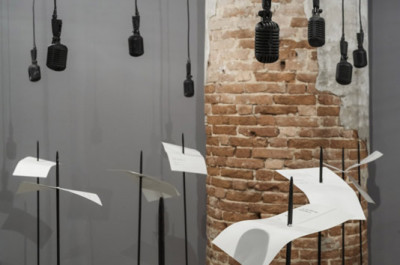 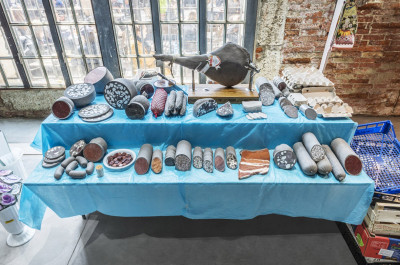 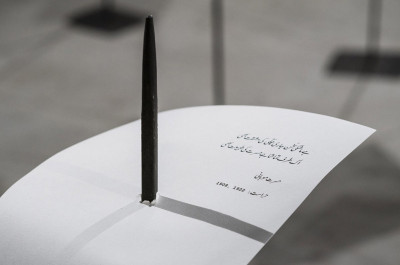 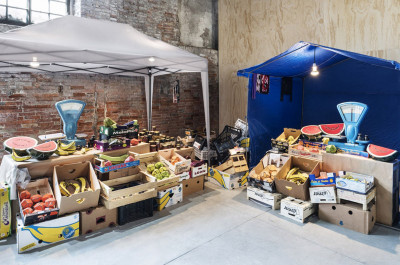 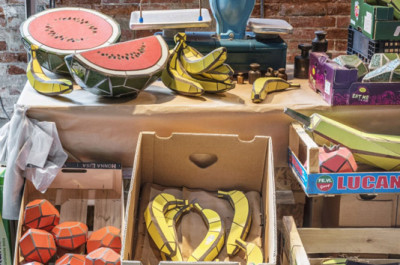 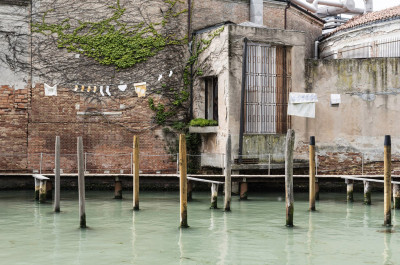 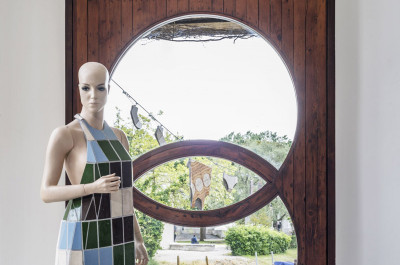 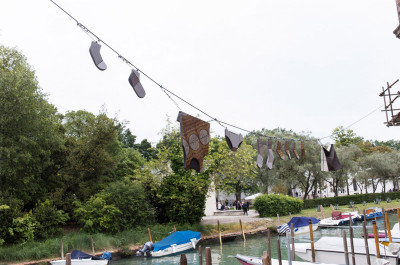 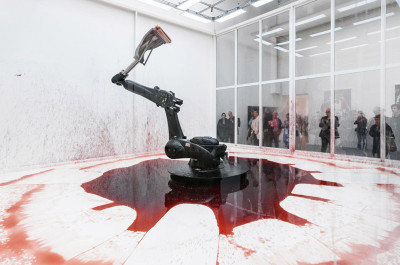 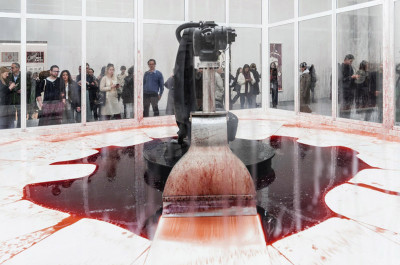 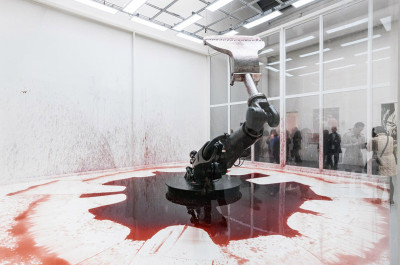 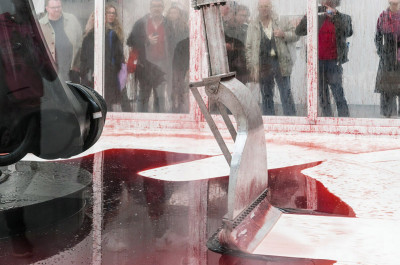 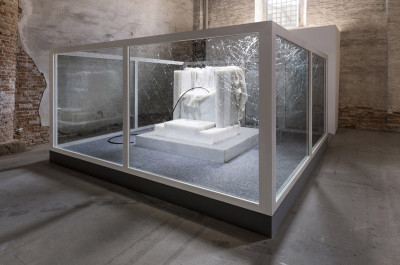 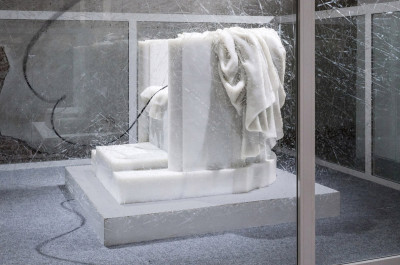 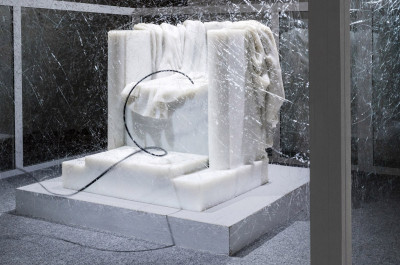 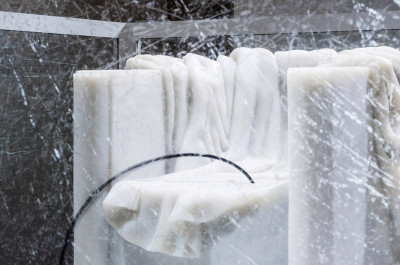 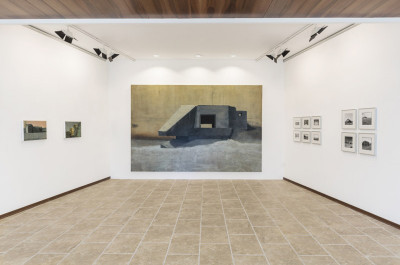 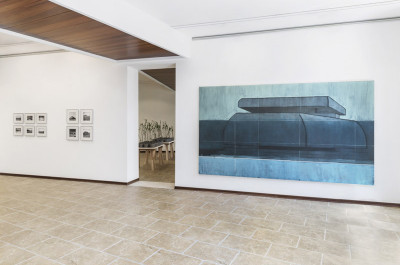 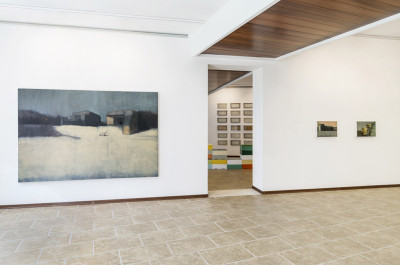 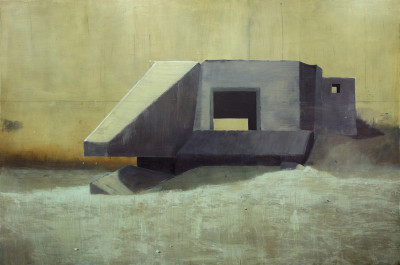 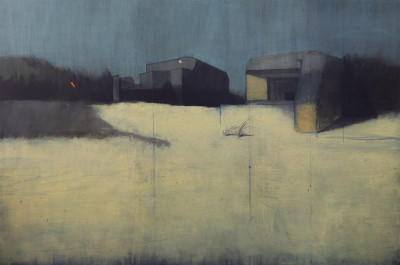 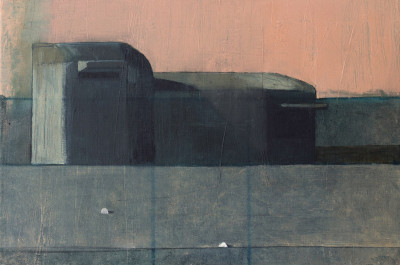